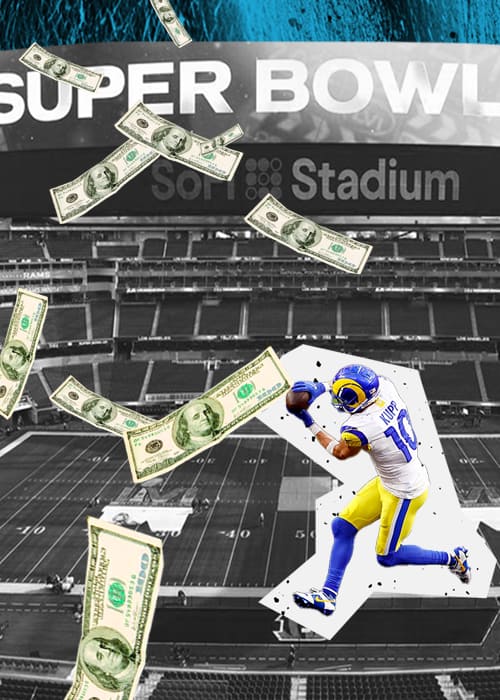 Just in case you’re no sports fan (or Britishly biassed towards real football), the Super Bowl is the annual playoff championship of the NFL.

However, as important as the big game is, the massive amount of ads playing across the commercial breaks are what we’re placing on the field to compete today.

The average cost for a 30 second Super Bowl commercial for 2022 was a whopping $6.5 million! No doubt the brands advertising have the cash to splash, but are they making sure every second counts?

So who came out creatively on top and who missed the goalpost and flopped? Let’s kick off with the champs to give you some ideas of what you should include in your adverts for jaw-dropping campaigns that convert in an instant!!

Including celebrities in Super Bowl ads is a tried and true method – however, there’s a balancing act between using them efficiently or just “celebrity stuffing” for the sake of it. And we know not everyone has the budget to get Nicholas Braun or Trevor Noah in their ads.

Uber Don’t Eats is a tongue-in-cheek campaign in which celebrities such as Jennifer Coolidge struggle to grasp the delivery services expansion into household shopping.

If the silly “does that mean I can eats it?” line doesn’t make you chuckle, perhaps Gwyneth Paltrow tucking into a vagina-scented candle for dessert will.

Uber’s campaign highlights its new service in such a ridiculous way; it’s hard not to enjoy recognisable faces confused and chomping into lightbulbs.

Uber Don’t Eats has gained a ton of engagement across platforms, with 547,156 views on Youtube and a 19k reach for its hashtag #UberDontEats.

Emotionally engaging your audience is no easy task – especially in under a minute. But, it is key to building brand awareness and driving conversions.

Research by Pringle and Field found that emotional campaigns outperformed on almost every metric – including revenue, profit, and share gain.

Toyota’s Brothers campaign places you in the perspective of Winter Paralympian Brian McKeever and the hurdles he and his brother have overcome and dominated throughout their strong bond.

Utilising a point of view (POV) angle throughout its ad, the audience immerses themselves in the cold, uphill challenges the brothers have faced, with their hard work resulting in 13 gold medals throughout the Winter Olympics.

Through a focused, people-first approach rather than product placement, #StartYourImpossible resonates on an emotional level rather than a persuasive one. Clearly, an effective strategy, as the campaign gained a 351.9K reach across social media platforms.

The Gold Star goes to…

Someone give a shiny star to Squarespace for its sweet spot about slippery tongue twisters and shelly services!

Sally’s Seashells encapsulates everything about owning your own business – the struggles, the solutions and the brand expansion, with Squarespace representing itself as the best place to start.

Through whimsical wordplay, alongside electric editing, colouring and direction (from legendary director Edgar Wright), the ad is visually striking for the eyes and audibly engaging on the ears.

Squarespace does what all great ads do and presents itself as a distinctive, timeless classic that will never get old.

Sally’s Seashells washed in over 8,666 tweets and 101,027 engagements for Squarespace.

Having one of the most noticeably talented celebrities in your ad doesn’t hurt either; Zendaya’s inclusion brought in 10,431 tweets and 108,335 engagements. Shucks, that’s a lot!

Sally’s Seashells is a perfect example of how keeping things short, sweet and simple can still make an engaging ad. Playing on familiar themes and concepts can be a great way to attract large audiences; it’s how you creatively separate yourself which is key.

Ads that missed the mark

Not every campaign hit a home-runner (wrong sport, sorry).

The last thing brands want is to waste budget on ads that don’t wow. Researching your audience and what tropes, celebs and ideas they resonate with is key to planning your stellar ad.

It’s worth mentioning that you need to understand what sub-cultures your audience operates in and make sure they’re represented accurately in their advertising.

According to We Are Social, 82% of internet users say they’re not represented in advertising. Although social media ads are better, there’s still a way to go, with only 55% of GenZ saying they feel represented on social media.

Long story short, your ads need to represent both your brand and your audience.

Here are the ads that just missed the mark when it came to their creativity and brand representation.

Meta (known by boomers as Facebook) needed to bring something extra engaging this year to the Super Bowl, following its hot water controversies regarding safety and privacy.

With the release of its new VR headset, MetaQuest 2 (previously known as Oculus) underway, you would imagine the self-proclaimed leader of the internet’s new meta-age would be ready with something awesome. We got this campaign instead.

We were “treated” to animatronic animals (giving off very Five Nights at Freddie’s vibes) that would keep children awake for hours on end.

On top of that, Meta’s message seems muddled – is the world getting you down? Escape reality through our brand new headset! Very dystopian; probably not the wisest statement to make when the world has just come out of a global lockdown.

Unlike Toyota’s brand message of being the best you can be, Meta presents itself as a brand that wants to escape real-life issues. A sentiment augmented reality products might want to avoid.

We’re guessing Meta didn’t consider how their audience would feel about this message when they made this ad. Like we said, understanding your audience and how they behave or represent themselves is key.

Remember The Sopranos? I remember

Chevrolet’s First-Ever Electric Silverado campaign is an almost shot-for-shot remake of The Sopranos classic opening, with the music adding an extra topping of “remember this show?” to the ad.

Creatively, the ad misses the mark in adding something new to the discussion. After watching, I don’t feel like buying a Chevrolet; I want to watch The Sopranos for the 5th time.

Though personally, the campaign’s lack of originality didn’t engage us creatively, the 11,589,824 views on Youtube don’t lie. Nostalgia and pop-cultural references will always strike a chord with audiences.

There were plenty of meh-marketing moments throughout this year’s Super Bowl. Instead of focusing on what went wrong, the key takeaway from these campaigns is making sure your brand’s message is engaging.

No matter how big your brand is (from Taco Bell to Toyota), you have to hook your audience with something they’ll remember.

Squarespace’s tongue-twister and Uber Eats’ silliness; these ads stick out because of their straight-to-the-point originality – not relying on other media or muddled messages.

If you’d like to see how other campaigns kept the engagement levels strong throughout the Super Bowl, check out our blog on last year’s big game here!

Who won the Super Bowl? Crypto!

Though these choices were our personal highlights, the digital currency, crypto, won over the most eyes at this year’s Super Bowl.

Coinbase reportedly paid $14 million for its 30-second ad at the big game. The ad itself was simplistic but super effective – with a multicoloured QR code bouncing around the audience’s TVs like an old-school DVD screensaver.

Simplicity sells, sometimes too well; Coinbase’s website crashed during the broadcast – showing how large the crypto climate is right now.

FTX’s, Don’t Miss Out on Crypto campaign (featuring the king of cringe, Larry David) has gathered an insane 40,342,366 on Youtube too.

Is crypto the new hot-topic marketers should be dipping into? Perhaps people enjoy pretty moving squares and Seinfeld more than anything? Either way, cryptocurrency is booming; we’re spending $6.8 billion annually in digital payments, according to We Are Social.

We’ll be sure to keep you posted on all the news we hear about digital currency developments here.

From crypto to Kanye to seashells by the sea, the super bowl commercials this year showed off a variety of distinct creative.

In a world of ongoing social media campaigning being the new norm, it’s crazy that the return on investment (ROI) for televised ads is still going strong.

“According to Kantar research, the 2021 Super Bowl ads delivered an average return on investment (ROI) of $4.60 per dollar spent, with ads for Mountain Dew, Verizon, T-Mobile, and General Motors achieving the best results.”

These ads will only become more effective with the rise of social media – with native content such as memes and TikToks furthering a campaign’s reach through user-generated content.

But the key is understanding your audience and testing your adverts on your users, so you know whether your ad will hit the mark – whether it’s on the big screen, on mobile devices or in a game.

If you’d like help supercharging your campaigns or want further advice on how to make your creative stand out against the rest – contact our team of experts now.

Pride 2022
5 things you can do to support the community

Grab a glass of bubbly! We’re celebrating after being shortlisted for four categories in the UK Social Media Awards 2022!

With Pride 2022 in full swing, we're showing marketers the significance of Rainbow Washing in the community and how to avoid using it in ads.